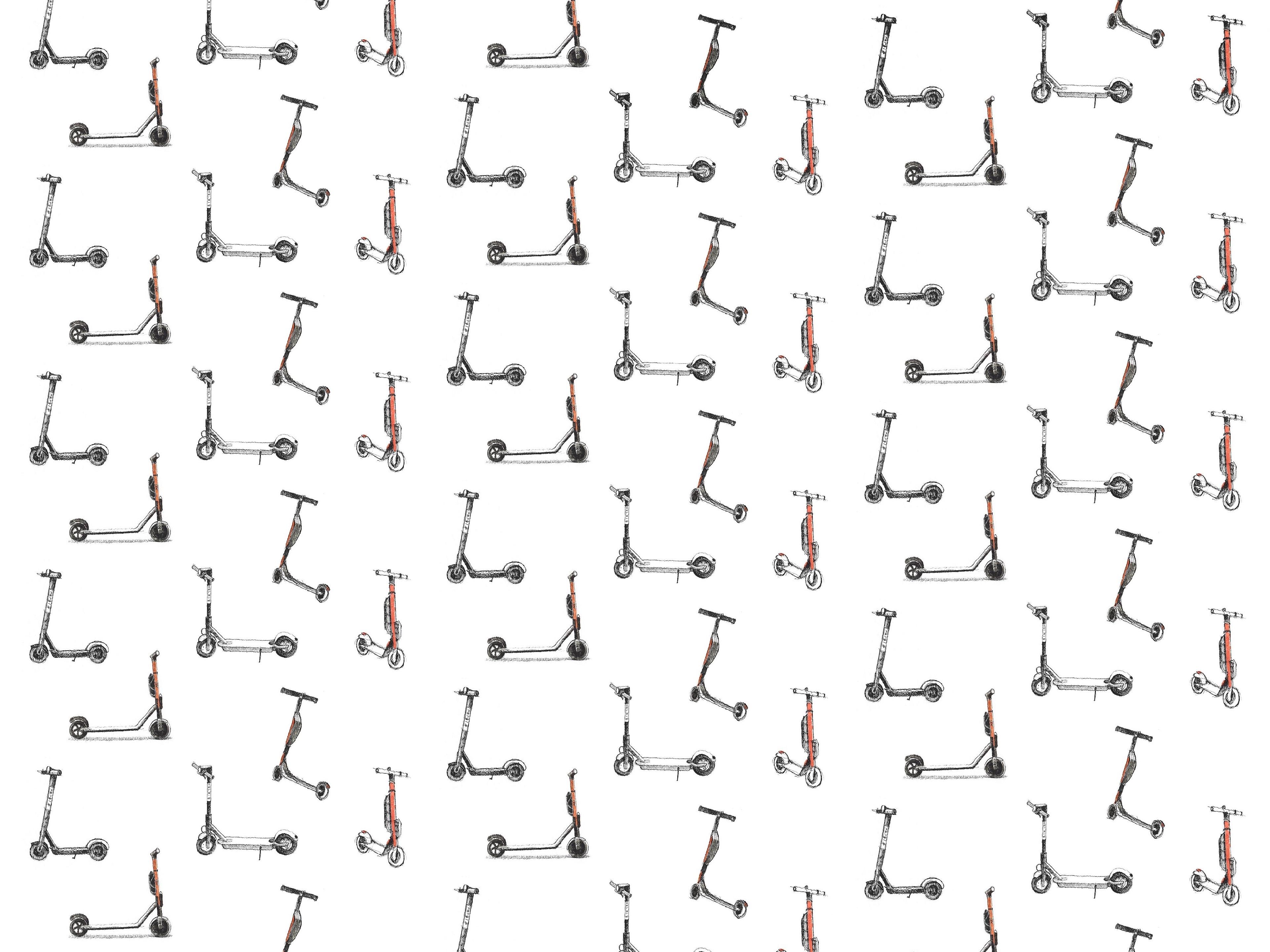 Would the Amish Ride Electric Scooters?
Do Less, Better.

Over the last months, I've been questioning why the streets of my hometown are flooded with electric scooters, at the same time that I keep asking myself if I should continue using social media and how.

In this essay, I briefly explain the way Amish communities decide whether to adopt a given piece of technology, and, hopefully, convince you that our modern communities—and ourselves as individuals—can learn from why and how the Amish do it.

I'm not, of course, the first to look at Amish communities and their use of technology, or even the first to look at the benefits of their decision process in relation to technology adoption. This text is greatly inspired by Cal Newport's latest book Digital Minimalism, Kevin Kelly's essay on Amish Hackers, and The Amish Struggle with Modernity by Donald Kraybill.

Being slow with technology

Amish communities in the United States and Canada are structured in church districts, led by a bishop, of around thirty to forty families. Each district member follows a set of church rules—the Ordnung—that not only dictates ways of living but prohibitions and limitations to the use of tools, technologies, or even clothing.1

As Cal Newport points out, "the popular understanding of this group is that they're frozen in time—reluctant to adopt any tools introduced after the mid-eighteenth-century period when they first began settling in America."

Contrary to popular belief, the Amish make use of a great set of modern technologies. What sets them apart is why and how they use those technologies.

In his book The Amish Struggle with Modernity, Donald Kraybill explains how, in the fall of 1909, several Amish communities banned an emerging technology that presented "a direct link with the outside world." The telephone. Communities were afraid that the boundaries between the community and the outside world would blur, bringing in "new information and ways of behaving." As of today, the Amish are still not allowed to own a mobile phone, but many communities allow homes and businesses to install a landline telephone.

“Clothing, for instance, is used in modern life as a tool of self-expression. In Amish life, uniform dress serves as a badge of group identity and loyalty as well as a symbol of self-surrender to community priorities,” notes Kraybill.

As you might have already guessed, the Amish pay special attention to how new technologies, if adopted, would affect their community. Decisions such as what to wear or whether to own a smartphone are dictated by community rules, not by the individual. In one way or another, this skepticism toward technological progress seems to maintain the integrity of the Amish ways of living, providing community members with a sense of belonging at the expense of their individual expression and autonomy.

In modern communities (and I assume you live in one if you're reading, as this text is being shared over the internet), we approach technology in a radically different way than the Amish do.

The so-called new technologies, as Cal Newport refers to social media and other online services in his book Digital Minimalism, require close to zero effort, and only a few seconds, to open a new account. Seemingly free, these services promise to enrich our social interactions.2 But we rarely stop and ask how these digital tools could negatively affect our happiness and well-being. Common concerns are often along the lines of how much a service costs and how much personal information you have to give away in order to use it.

Before subscribing to the use of any new tool, the Amish study them as a group—letting motivated Amish hackers explore the potential harms a given piece of tech would bring to their community.

Of course, this approach presents a barrier toward technological progress and individualism, but it's also what allowed Amish communities to perpetuate their lifestyle for centuries, being mindful on every step forward, adopting technology slowly or ignoring it altogether, and not letting the latest trend determine how they live.

The Amish way aims to shield community members from the potentially harmful effects of mindlessly embracing new technologies, whereas their rapid adoption often leaves the rest of us at the mercy of however tech companies want us to use their services, with no time to think about how they'll affect our day-to-day, alter our habits, and change the way we relate to each other.

It's easier to sign up than it is to delete your account. The potential damage of technology is often an afterthought. Empirically, we discover the bad side of using a given service, things we didn't foresee while we were creating an account. And it turns out to be so much harder to remove a technology from your life once you get used to it than it is to add a new one, and even more when we all approach the same problem as individuals instead of as a group.

In the summer of 2018, I went on vacation to Los Angeles with my girlfriend. In our visit to Venice beach, we saw, for the first time, a flock of around four hundred scooters spread around Santa Monica pier. Some branded as Bird, some branded as Lime. A ridiculously-crowded space with hundreds of geo-located scooters, providing an app-based online service that anyone—with a smartphone, a credit card, and an internet connection—could make use of to wander around the beach.

"An electric powered scooter having a tubular frame extending between a front steerable wheel and a rear electrically powered wheel," reads United States patent filed by Steven J. Patmont on January 31, 1996—one of the many inventions that contributed to the device you can find today on almost any street corner of modern cities.

Apparently, these electric scooters, colloquially known as e-scooters, have been around since the 80s.3 But it wasn't until recently that they've become a mainstream mode of transportation to wander around cities instead of using public transportation, walking, biking, or even driving.

Jump, a brand by Uber, recently placed more than five hundred e-scooters around the streets of Madrid,4 and around eight different brands have done so in my hometown, Málaga.5

After my first encounter with these devices in Santa Monica pier, I met with Ian Keough at his recently renovated house, in the residential neighborhood of Culver City, California. "[Going a mile] used to involve shoes or a bicycle. And now it involves a mobile phone, satellites in space, a mechanism that's powered by a lithium battery [that] was mined in Chile and assembled in China, and shipped into containers across the whole global infrastructure for getting to this point, where you just want to go a mile. That's something you could have done for free."6

As Keough followed, "when [people] ride them in residential neighborhoods, there's no rules. [They] abandon them on the lawn in front of your house."

This might sound like a simple rant, but I believe Ian shares feelings with many others, as this is not a particular situation of Los Angeles or Culver City, but a phenomenon taking place in cities all around the world. Signed up for Bird in Cambridge, Massachusetts? You can use the same app to ride scooters in Paris, London, or Tel Aviv. Without notice, citizens found scooters on the streets, with no chance to plan ahead or vote on why and how to incorporate this new service into their communities.

It's a recurrent pattern. We're left to the will of startups; emergent technologies catch us by surprise; and their regulation is only an afterthought.

Don't take me wrong. E-scooters are a promising alternative to carbon monoxide vehicles. In Málaga, it's unclear to what extent scooters are allowed and how we should make use of them. (Ride them on the road or on the sidewalk? Park them anywhere or only on designated spaces?) Apart from incorporating a relatively high-speed vehicle into pedestrian lanes, we're still to see the effects of replacing one of our remaining moments of active transport—walking or biking—with a passive ride. Some people need wheelchairs and scooters to move around and stay active, but some of us, luckily, can just walk places.

Can you imagine how would the Amish approach a similar issue? Kevin Kelly, who spent a good amount of time studying how the Amish live, definitely has some clues.

"Amish lives are anything but anti-technological."

Kevin Kelly has found the Amish to be "ingenious hackers and tinkers, the ultimate makers and do-it-yourselfers and surprisingly pro technology."7

"When new things come around, the Amish automatically start by refusing them." What's interesting is that they let eager Amish hackers try new tools. "This is how the Amish determine whether technology works for them. Rather than employ the precautionary principle, which says, unless you can prove there is no harm, don’t use new technology, the Amish rely on the enthusiasm of Amish early adopters to try stuff out until they prove harm."

In his post Amish Hackers, Kelly points out as well that while it might take the Amish several years to decide on a given technology (like was the case of cell phones) they steadily adopt technology. "Their manner of slow adoption is instructive." The Amish are as good at trying new things as they are to abandon them. "We are good at trying first; not good at relinquishing – except as individuals."

Cal Newport warns of how the addictiveness of the design of new technologies renders slight corrections and resolutions ineffective to keep these technologies out of your cognitive landscape, "What you need instead is a full-fledged philosophy of technology use, rooted in your deep values, that provides clear answers to the questions of what tools you should use and how you should use them and, equally important, enables you to confidently ignore everything else."8

How do the tools you use (and the ones you want to try) support your deep values? I don't think we need to become Neo-Luddites and reject modern technologies.9 But there's one thing I'd learn from the Amish—their willingness to completely abandon technologies that negatively impact their lifestyle; Being flexible to adapt how you use technology, or going cold turkey if necessary, for your habits to support (and not to dictate) how you want to live your life.

What do you think?
Would the Amish ride electric scooters?